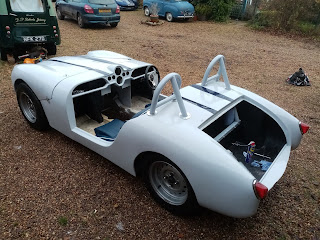 I can`t believe seven years have passed since my last post on here, in the intervening years i have moved house and spent most of my car working time on the Fairthorpe Electron Minor which my father Frank built in 1958. That is now repainted in it`s original colours and i have built up and fitted a nicely tuned 1296cc Triumph Herald small crank engine, the car has been down to the Le Mans Classic twice and taken part in a couple of AutoSolos and a track day at Cadwell Park. My fathers car is very original  and i do not want to cut the bodywork to fit a roll bar but my competitive spirit has been reawakened and the Zeta will be built up to be used on track days as well as on the road. I restarted work on the car late last year and have had a custom made roll bar fitted and work is now taking place on the dashboard area of the bulkhead and on building the 2553cc Ford Zepher engine up. Here are a couple of pictures as an update, more will be added over the next couple of months so check back to see how the car is progressing. 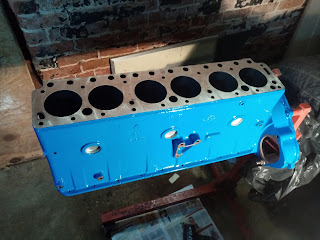 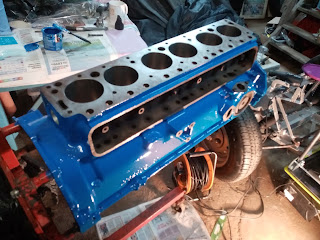 Posted by Martin Collins at 10:47 No comments: 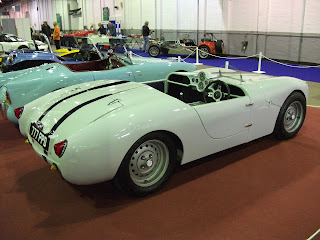 777 PPD has been featured in a new online Classic car magazine called Classic Sports Car and Special. At the moment it is only available to view on Ipads, it is hoped to make it viewable in windows format for PC`s in the future. Below is the link for the magazine, You can get to it on an Ipad by going to the website at www.ClassicSportsCarandSpecial.com
Posted by Martin Collins at 16:06 No comments:

The story of 777 PPD starts in January 1960 when Bob Linwood took delivery of his Fairthorpe Zeta kit from the Fairthorpe works. The Zeta was the top of the range model and was supplied as standard with a 2553cc Ford Zephyr straight 6 engine although one Zeta was ordered with a TR3 engine for motoring journalist Tony Bostock. The Zephyr engine could be ordered either in standard spec or fitted with an Alexander head with twin or Triple SU carbs or the more powerful alloy Raymond Mays head with 6 Amal carbs, this is sometimes referred to as a BRM head. Bob was going racing with this Zeta so the Mays option was ordered with his kit, here are a couple of build up shots taken by Bob in early 1960 reproduced with his kind permission. 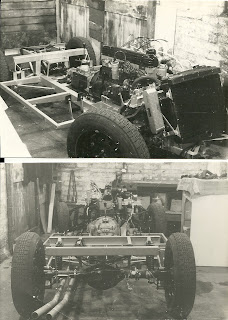 Bob `the builder` reunited with his racer. 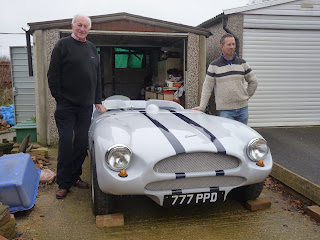 In early January we had the pleasure of a visit From Bob and Ann Linwood, Bob built my Zeta over the winter of 59/60 and raced it at a number of events throughout that year picking up several trophies along the way. He was delighted to see the car back in one piece again and described it as an awful lot of fun to drive. Bob now lives in France but is looking forward to coming over again once the car is on the road and run in, hopefully i can get some video footage of him driving the Zeta which i will upload onto this site. 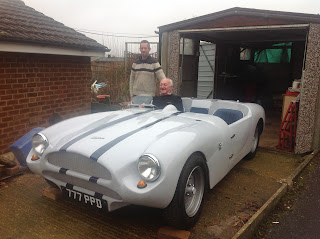 Posted by Martin Collins at 08:41 No comments:

Fairthorpe Zeta 777 PPD then and now.


The main reason for starting this blog is to catalogue the rebuild of this fantastic car, here is a taster to kick the blog off, the picture below was taken at Silverstone in 1960 with the cars builder Bob Linwood at the wheel. 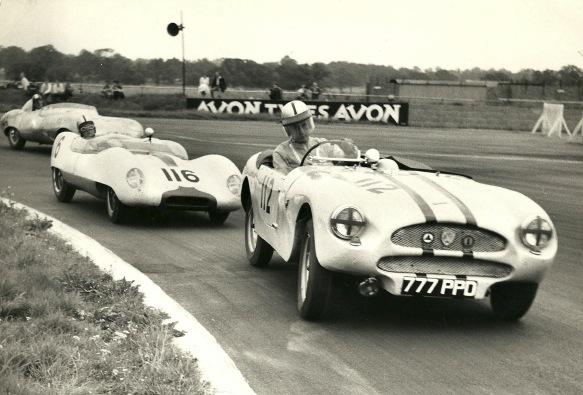 And fifty two years later the car made a surprise reappearance  again at Silverstone following seven months of intensive labour behind closed doors with work going on deep into the night on many occasions. The Zeta has had a busy past with plenty of circuit action, a number of owners and two burn outs but you can`t hold a good car down.  This picture was taken at the 2012 Silverstone  Classic on the Fairthorpe Sports Car Club stand 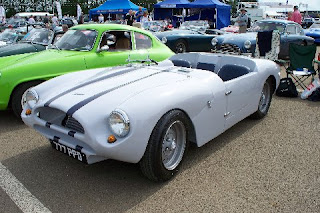 Hopefully that has whetted your appetite, the next post will be a description of what automotive ingredients go in to making up a Zeta.﻿
﻿
﻿
Posted by Martin Collins at 13:56 1 comment:

This blog is dedicated to the Fairthorpe Zeta, a high performance British fibreglass sportscar of the 1960s. It describes my rebuild of the most well known Zeta - 777 PPD - and covers the history of the cars, and the races and events they took part in.